Worship is the act of surrendering one’s soul to the Supreme Being – God. Different Gods and deities in Hinduism are believed to bless their devotees with different forms of goodness like peace, health, wealth, prosperity, etc. Also, with so many deities being worshipped in Hinduism, different Gods are associated with different days of the week. There are some that can be worshipped every day, while there are others who are believed to be even more pleased when worshipped on the day that best defines them. In this blog, we will speak about the four important Gods – Lord Shiva, Lord Hanuman, Lord Shani and Sun God – who are worshipped on specific days of the week to attain blessings. 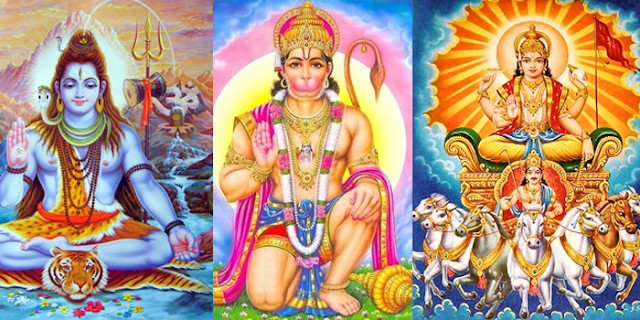 Why is Lord Shiva worshipped on Monday?
Lord Shiva is the ‘Mahesh’ of the Brahma-Vishnu-Mahesh trilogy, who is recognized as the Destroyer with his energy and power. He is considered to be one of the chief deities in Hinduism and is crowned as ‘Devon Ke Dev – Mahadev’. He represents truth, power, reform and winning over difficult and impossible situations. While worshipping Lord Shiva, there is no need of any image of him; he is worshipped in his Shivling form that represents the entire universe.
Hindu spinsters generally fast for 16 Mondays to impress Lord Shiva and request for an ideal husband. This is because Monday or Somvaar is broken down into Sa-Uma-Vaar, meaning the day of He with his Uma, where HE is Lord Shiva and UMA is his wife – Goddess Parvati. This is why worshipping him on Monday is considered auspicious. In fact, it is also believed in Hindu mythology that Maa Sita performed Gauri Shankar Puja in order to have a husband like Lord Rama. The Gauri Shankar Puja is a significant ceremony for eliminating all worries about your married life. If you are finding difficulties in finding a partner or having issues in your married life, you must perform Gauri Shankar Puja under the guidance of MakeMyPuja Pujaris to be rightly blessed by Mahadev and Maa Parvati.
Another reason why Lord Shiva is worshipped on Monday is because he adorns the Moon on his jataa. As he is known for his rage and wrath, and the Moon represents coolness, it is believed that worshipping him on Mondays is the most logical, as the Moon represents Monday. If you selflessly and wholeheartedly worship Lord Shiva on Monday, you can be blessed with health, auspiciousness, peace and Moksha.
Why are Lord Hanuman and Shanidev worshipped on Saturdays?
Lord Hanuman can be worshipped every day to enjoy a pious life and be relieved from troubles. However, Saturday has a specific significance. The logic of worshipping Lord Hanuman on Saturday goes back to the Ramayana period. Ravana, the Mighty, defated all the Devtas of heaven and imprisoned the nine planets that rule a person’s fate. He stifled all the planets under his leg. This is when Shanidev cast his drishti on Ravana that resulted in his horoscope going for a toss. Ravana imprisoned Shanidev to take revenge at an appropriate time. Hanuman arrived at Lanka and rescued Shanidev, who took refuge on Hanuman’s head and was safely rescued. Out of gratitude, Lord Shani promised that he would never affect Hanuman and his descendants. Therefore, people worship Hanuman on Saturday with the belief that Shani dosh will not affect them.
Another occasion was when Shanidev requested Hanuman to apply some oil on his wounds after being badly injured. Hanuman embalmed his wounds with oil and the pain disappeared. This is why it is believed that pouring oil on Lord Shani every Saturday defeats evils and brings good luck. Thus, both Lord Shani and Hanuman are worshipped on Saturdays.
Why is Sun God worshipped on Sundays?
Lord Surya has a special significance in every Hindu’s life as he is the center of the nine planets. Hindus worship Lord Surya on Sunday to improve their horoscope and soothe the disturbed planets. Surya Dev is the source of light, which has 7 colours in its spectrum. The colour white represents the source of light and also represents Sunday. This is why worshipping Lord Surya on Sunday morning ensures health, wealth and prosperity.
Make sure to worship the right deity on the right day of the week to soothe your planets. Also, for any other Pujas related to your horoscope like Mangal Dosh Nivaran and Rahu-Ketu Shanti Puja, you can rely on MakeMyPuja Pandits to help you out of these doshas.
Website: https://www.makemypuja.com/