Devshayani Ekadashi, also known as Padma Ekadashi, Toli Ekadashi, Ashadi Ekadashi, Devpodhi Ekadashi, and Hari Shayani Ekadashi in various parts of India, falls on the 11th day of the dark fortnight of the Ashadha month of the Hindu calendar. It comes after the famous Jagannath Rathyatra, and falls in the month of June/July of the English calendar; this year to fall on 4th July 2017. This day depicts the beginning of the Chaturmas, a holy period of four months of the Hindu calendar, namely Ashadha, Shravan, Bhadarva, and Aaso. These four months signify the period when people can engage in extra devotion, and can gain control over sense gratification. The holy day of Devshayani Ekadashi is of special significance to the Vaishnavas, the followers of Lord Vishnu. 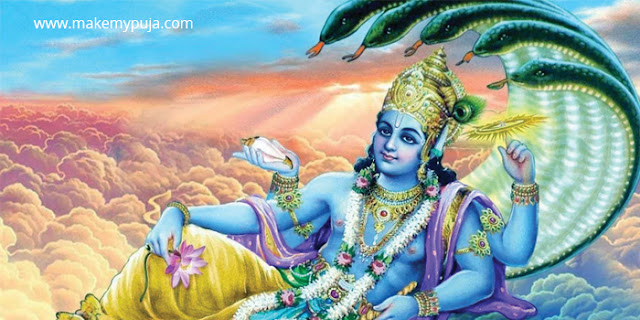 What is the significance of Devshayani Ekadashi?
It is believed that on the day of Devshayani Ekadashi, Lord Vishnu falls asleep in the Kheer Sagar – the cosmic ocean of milk, on the back of Shesha Naag – the comic serpent. He observes this Divine Sleep for a period of four months, and wakes up on the day of Prabhodini Ekadashi in the Kartik month of the Hindu calendar. However, Lord Vishnu never abandons his devotees even in his state of sleep. This is why Vaishnavas observe fasting on the day of Devshayani Ekadashi to honour Lord Vishnu and seek his blessings.
What is the legend behind Devshayani Ekadashi?
Once, there was a king named Mandata who always kept his kingdom and his people happy. However, there came an unfortunate time when his kingdom faced severe drought, starvation, and illness. The king left his kingdom in search of finding a solution to this adverse period, when he met a learned sage called Angira on his journey. The sage, after learning about his situation, advised him to observe a fast on the day of Devshayani Ekadashi, as it was only Lord Vishnu who could help him bring back the glory to his kingdom. As directed, King Mandata observed the fast and strictly followed all the rituals, following which he saw miracles happening! The rains returned to his kingdom, trade flourished, and his people were blessed with glorious riches.
What are the benefits of observing Devshayani Ekadashi?
Those who fast on Devshayani Ekadashi and pray to Lord Vishnu to seek his divine blessings can attain salvation and freedom from worldly avarice. Fasting on this day also frees one from his past sins, provides energy to face every challenge of life, enhances the physiological functions of the body, improves emotional stability, and helps strengthen one’s self-control. To attain these benefits, you must also observe a fast on this day, knowing that Lord Vishnu – the Master of the Universe – will answer all the prayers of a true devotee. Another way of pleasing Lord Vishnu is by performing a Satyanarayan Katha, where devotees worship the Narayan form of Lord Vishnu. You can hire MakeMyPuja Pandits to help you arrange for such a Katha at your home or office to offer gratitude to the Lord for all the pleasures and happiness he has given you.
The special Pandharpur Yatra
In the Solapur district of South Maharashtra, a huge religious processions of pilgrims known as Pandharpur Yatra is carried out along the banks of the River Chandrabhaga. Here, Lord Vishnu is worshipped in his local form known as Vitthal. Lakhs of pilgrims join this Yatra, carrying palanquins with images of various saints of Maharashtra. The pilgrims also chant hymns dedicated to Lord Vitthal.