New Year is the most important event for everyone because with the new calendar year, come lots of hopes, desires, and excitement. Although 1st of January is considered the New Year for everyone universally, but with a wide religious country like ours, ever different region and religion has its own different individual New Year. In the similar fashion, Baisakhi is the New Year for our Sikh friends. This festival is one of the greatest for every Sikh across the world, which falls on the 13th of April every year, and on 14th April once in every 36 years. This year, the festival is to fall on 14th of April.
Baisakhi is celebrated with great zeal and enthusiasm in the state of Punjab and all across the globe where there is significant Sikh population. It is believed that it was on Baisakhi in 1699 that Guru Gobind Singh Ji, the tenth Sikh Guru, laid the foundation of the Khalsa Panth. It is also believed that the festival marks the time for harvest of rabi crops, meaning that it is of great importance for the large farming community of Punjab. 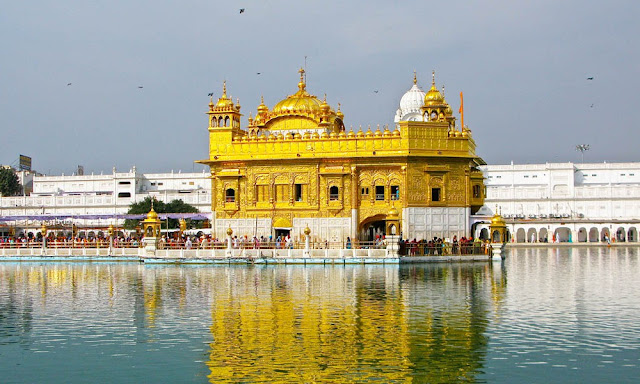 On the day of Baisakhi, the devotees wake up early and get ready in new clothes, and the first thing they do is visit the Gurudwara to express gratitude to God and seek blessings of the Guru Granth Sahib. One of the most important places to be visited on this day is the Golden Temple in Amritsar in the state of Punjab. Baisakhi involves great deal of feasting, along with performing Bhangra and Gidda on folk music, which makes the area surrounding the Golden Temple in Amritsar carnival-like!
The site of The Golden Temple was gifted by the Mughal emperor Akbar as a wedding present to Bibi Bhani, the daughter of the third Sikh Guru – Guru Amar Das, when she married Jetha. It was then that Jetha carried out the task of building the town named Amritsar there, with the lake named Amritsarovar. However, it was in 1588 that Guru Arjun Dev, the fifth Sikh Guru, laid the foundation of the grand Gurudwara in the middle of the lake. It took 16 years for the construction to complete in 1604. But in 1762, an Afghani invader attacked the temple and damaged it. Maharaja Ranjit Singh then in 1830, renovated the temple with marble and top-coated it with gold, after which it is known as ‘The Golden Temple’.
If you are in the city of Punjab on the auspicious day of Baisakhi, make sure to visit The Golden Temple to be mesmerized beyond the realm of words. Over one lakh people visit the temple on a daily basis, so you can imagine the sight at this temple on this grand day! Seek blessings of the Guru Granth Sahib, and also indulge in the grand community lunch known as ‘Langar’.

The day of Baisakhi is also important for the Hindus as it is believed that it was on this day in the year 1875 that the Arya Samaj was founded. Also, Baisakhi marks the entry of the sun into the Mesh Rashi, which is why many astrological Pujas are also conducted on this day. People who are negatively influenced by the Mangal and Surya grahas are specially advised to perform appropriate Pujas on this day. You can get in touch with the reliable and experienced Pandits at MakeMyPuja who can check for any such ill-effects in your horoscope and perform the correct rituals to solve the same.