Surya Jayanti, as the name itself says, is the birth day of Lord Surya - one of the most important Gods of the Hindus. This day falls on the seventh day of the bright half of the moon - Shukla Paksha - in the Magha month of the Hindu lunar calendar. Lord Surya is seen driving his chariot that is driven by seven horses. Therefore, this day is also known as 'Ratha Saptami' - Ratha meaning the chariot in Hindi, and Saptami meaning the seventh day. This year, this auspicious day falls on the 3rd of February, when Lord Surya, the son of sage Kashyapa and Aditi is heartily worshipped. 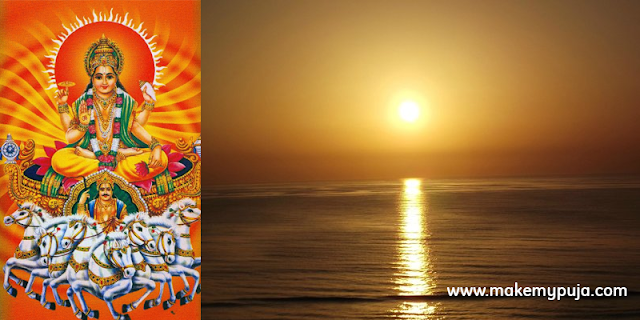 Lord Surya and his chariot – The representation
Ratha Saptami, meaning the seventh day of the chariot, depicts Lord Surya turning his chariot towards the Northern hemisphere in the Norht-East direction. This chariot is driven by seven white horses. Some believe that these horses represent the seven colours of the rainbow (VIBGYOR) while other believe that they represent the seven days of the week, starting with Sunday – the day of Lord Surya. Lord Surya’s chariot is seen to be having 12 wheels, which represent the 12 astrological signs that form a complete year, known as ‘Samvatsara’. The Sun begins the year by residing in his own house – Leo. He then keeps moving to the other 11 houses – a new one every month, thus covering all the 12 astrological signs in one year. As he shifts to each different house, he affects the natives of those astrological signs respectively in an astrological manner.
Importance of Surya Jayanti for Indian farmers
As and when the Sun shifts to different signs, his movement indicates the varying temperatures across the country. The day of Surya Jayanti symbolizes the change of temperature such that the season changes from spring to the harvesting season. Therefore, this day is one of great joy and enthusiasm for the farmers in India as this event indicates harvesting and the beginning of sowing for another great season. This is why the farmers highly worship Lord Surya on this day to thank him for the season he has blessed them with.
Legend associated with Surya Jayanti
There are many legends associated with the significance of Surya Jayanti. However, there is one very important and popular belief which goes like this. King Yashovarma of the Kamboj Empire was not able to attain a son for many years after marriage. He was worried as to who would rule his kingdom after his death. After years of performing religious rituals and praying to Lord Surya, he was finally blessed with a son. However, the child was terminally ill. Sage Kashyap advised him to have his son perform the Surya Jayanti Puja to get rid of all his past sins and recover from his health. As said, the king’s son started performing the rituals, and he finally recovered. He was thus ultimately able to rule his kingdom well for his entire lifetime. Ever since, the rituals of Ratha Saptami or Surya Jayanti Puja have been performed by the Hindus.
If you are looking for betterment of your health and mental state, or if you want to gain strength to overcome difficulties and attain victory, you must also worship and pray to Lord Surya to bless you. You may visit a Surya temple on the occasion of Surya Jayanti or offer a small Puja at home by applying kumkum on the forehead of Lord Surya’s idol and offering him milk, white flowers, fruits and prasad. However, for any other Pujas you want to perform to get rid of all the ill-effects that the inappropriate planetary alignments in your horoscope have on your life, you can get in touch with MakeMyPuja to help you. The MakeMyPuja Pandits will check on your horoscope and let you know the right kind of Pujas you need to perform to remove the ill-effects and help you live a peaceful and successful life ahead.