Hinduism is the religion that has innumerous rituals, customs, and traditions followed, right from the time a child is born, up till the rituals after death are completed. Every child who is born into a Hindu family has to undergo quite a lot of rituals in his first year itself; the first one being Namkaran, followed by Annaprashana, and then Mundan. This blog will take you through the journey of all of these rituals to help you understand how you can perform these rituals with the help of MakeMyPuja Pandits to make them the most beneficial and promising ones for your child. 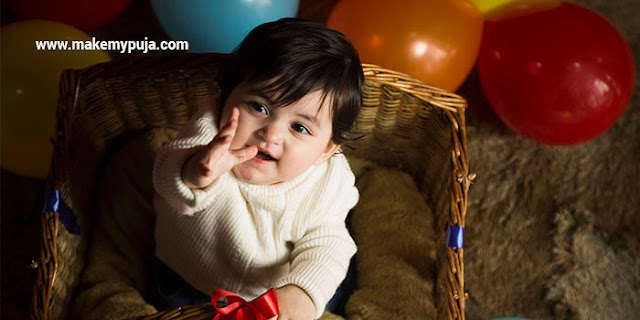 Namkaran – Naming the child
Namkaran is the Indian practice of naming a baby on the 12thday after birth, because the first ten days after the baby’s birth are considered to be a period of impurity for both the mother and the child. The ceremony is held at home or in a temple in the presence of a Pandit, who prays to Agnidev – the lord of fire, the Pancha bhoothas – the five elements, and to the Pitru – the ancestors who are considered present in spirit form, to seek their blessings for the child, requesting them to protect the newborn. He also draws out the child’s horoscope that depicts all the positive and negative aspects of his life, along with the initials after which a child can be named. As per the initial, the child’s name is decided, and the father or maternal uncle whispers the name into the child’s ear to bring it into effect. Performing a Namkaran Puja as per the rituals and rules of the Vedas can bring good luck, fortune, and success into a child’s life. So, book MakeMyPuja Pandits to have your baby’s Namkaran ceremony performed in the most auspicious way so as to seek blessings from the deities for a healthy and prosperous life for your child.
Annaprashana – Feeding the child for the first time
This is the time when the baby is for the first time weaned away from the mother’s milk, and is made to eat solid food like boiled rice or rice kheer. This ritual is carried out when the child is 6 to 8 months old, with odd months for girls, and even months for boys. MakeMyPuja Pandits can help invoke the Gods and deities to seek blessings for the child so that all his senses are gratified, leading him to live a happy and contented life in the future. The Pandit also performs a Havan for a healthy and auspicious start of the child’s new phase.
Mundan – Shaving off the hair
The next ritual on the list for the little ones in Hinduism is the Mundan, which involves shaving off the hair from the child’s head for the first time after birth. It is believed in Hinduism that a soul passes through 84 lakh yonis before acquiring the human form. Therefore, this ritual is believed to have the child getting rid of all the sins and bad influences of the past lives to help lead his current life afresh. Thus, we can say that the Mundan ceremony is a purification act performed to cleanse the baby of all the unwanted elements of past births. Many people have this ritual done in the first year itself, but it can also be performed in the 3rd, 5th, or 7thyear. A MakeMyPuja Pandit can help you decide on the most appropriate date and year for your child’s Mundan depending upon the position of the Nakshatras.
Birthday – Completion of the first year
Although this is not a necessary ritual, but it is advised that you celebrate your child’s first birthday by praying to God and thanking him for the wonderful life he has given to your child. Also, you can hire MakeMyPuja Pandits to help you perform a Janamdin Puja wherein he can pray to God to remove all the negative effects of the stars in your child’s horoscope that may affect his life and fate in the future. Performing the Ganpati Sthapna, followed by Navagraha Sthapna, Kalash Sthapna, Deep Prajjawalit, Shodhashopchar Puja, and Aarti in the right way can help bring prosperity, physical wellness, and mental welfare for your child, along with blessings for a longer life.
So, whether it is Namkaran, Annaprashana, Mundan, Janamdin Puja, or anything else, you can always rely on MakeMyPuja to have it done in the most appropriate manner for the best results.